From the Back Record Cover

“This unique recording offers the listener the actual first hand stories of those involved…as told in their own voices. It is a revelation to the uninitiated. Substantiation to the believing buff, and excitingly new information to the skeptic.” – Nick Lacy, “Week End West” A.B.C. Radio

“If you’re looking for a simple answer to this question, you won’t find it in this album. Instead you will hear eye-witnesses claim the UFO’s they’ve seen to be from football-sized to 70 feet wide, flashing every color of the rainbow. Some insist the UFO’s are here on a peaceful mission; another quotes an Air Force officer who states UFO’s accounted for the utter disappearance of three of our aircraft. And a Florida resident wears a lump of scar tissue on his forehead where he says a UFO shot him with a blinding beam of light.

“FILE 733 UFO” brings actual voices of Americans who are just like you and me…except for one or two startling experiences. Like the lady who played hostess to seventy people, and every one of them saw the frightening glowing objects that plagued her hillside home for weeks. Or like the California man who rode in a fourteen-room, thirty-foot tall space ship and discussed religion with the commander but who has been asked by the Air Force to soft-pedal the experience. Or the lady whose journey to the corner store was delayed by a fiery flying object which stopped her car and ruined her battery. Or the…

But what do the “officials” say? The Air Force spokesmen questioned on UFO’s seem to brush the subject aside, leaving only a crack of light beneath a curtain of indifference: yet their project “Blue Book” admits a small percentage of UFO sightings remain unexplained. Scientists meanwhile back away from the subject.

Whatever your notion about Unidentified Flying Objects, “FILE 733, U.F.O.” will be an absorbing listening experience you’ll play over and over again. And, who knows? It may turn out to be history in the making!”
– Jim French, Radio K.I.R.O.

Who is Jack Jenkins?

The young producer-narrator of “FILE 733 UFO” is Jack Jenkins, a Korean veteran and inveterate seeker of truth, whose part-time hobby investigating unidentified flying object reports has consumed thousands of hours — and hundreds of dollars. His search for information on the UFO has taken Jenkins to plausible-seeming pilots, earnest and modest matrons, impassioned self-professed prophets and nerve-wracked homemakers who have grown to wish they’d never been visited by UFOs. The narration contained in this album is concise and documentary intone, and the voices of the actual UFO contactees or authorities were recorded by Jenkins with a minimum of tape-editing, removing only pauses and redundant material. As a broadcaster, as well as a long time friend, it’s a pleasure to know that thousands of Americans will now enjoy the opportunity of meeting one of the communications industry’s most promising young men: Jack Jenkins. – Jim French 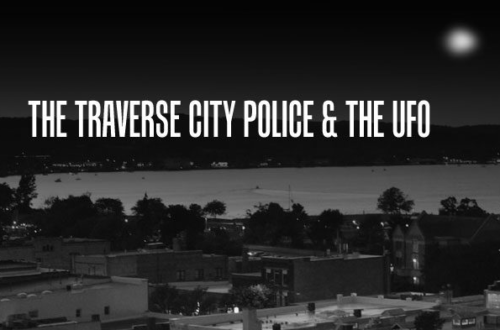 The Traverse City Police & The UFO