The cold December nights of 1913 seem filled with a strange creature which only served to chill the blood of citizens in the Bronx more than usual. Some newspaper accounts labelled the creature a “Werewolf” and parents were told, by police, to keep a watchful eye on their children. As if a werewolf roaming the Bronx wasn’t odd enough this creature added a new supernatural spin to the old legends, it glowed.

Witnesses of the beast described it as having glowing and “gleaming, pale eyes” and some even said that the creature’s jaws shot fire and emitted “sparks” as it snapped its teeth. The “werewolf” attacks also seemed to coincide with a series of robberies taking place in and around the area. The sightings of the creature and the hold-ups began to panic the public so police Captain Mike MeKeon told his officers to catch the beast.

Early one morning a policeman named McKiernan saw four men hiding in the shadows along the road. He gave chase and eventually caught one of the men. As he attempted to place handcuffs on the suspect he heard a snarl and felt a bite, “like a vice” on his leg. Looking down, in shock and amazement, he found himself staring at a glowing dog. The animal tore at the officer’s leather leggings so Officer McKiernan stuck the dog with his nightstick and it dropped to the ground. He described the dog as glowing almost as if it had been painted with phosphorescent paint. Rushing his captive to the police station seemed to be the biggest mistake for when the police returned to the area, the creature had vanished.

A paw print, non-glowing, was entered into evidence. From there the story goes dark. 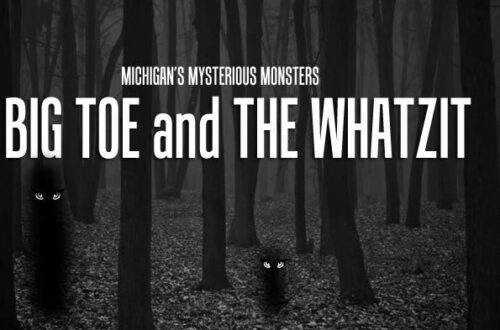 Big Toe and The Whatzit